Spend on Small Business Saturday hit £1.1bn this year, exceeding the billion pound mark for the first time ever as shoppers showed support for their local high streets.

The UK’s eighth annual Small Business Saturday, which took place on 5th December 2020, saw 15.4 million people hitting the high street and shopping small, according to research commissioned by founder and principal supporter American Express. This represented a 2.2 million decline in footfall compared to last year, but the average per person spend rose from £45.42 in 2019 to £70.74 in 2020, a 56% increase.

Shoppers who took to the high street demonstrated a real sense of community spirit, with 48% stating that they chose to spend money with small businesses as they wanted to support them as much as possible after a tough year.

The campaign was supported by political figures across the country including the Prime Minister Boris Johnson, Chancellor Rishi Sunak, leader of the opposition Keir Starmer, First Minister of Scotland Nicola Sturgeon and a host of members of parliament who visited small businesses to support the campaign in person, or virtually.

Mayor of London Sadiq Khan visited retailers on London’s Oxford Street to show support for the campaign, which encourages people to 'shop small’ and support businesses in their communities.

Michelle Ovens MBE, Director of Small Business Saturday said: “It is fantastic to see such phenomenal, record-breaking support for small businesses, in one of the toughest years many have ever experienced. Small Business Saturday has been running for eight years, but this year’s campaign has been our most vital. We are delighted that it’s generated such a massive boost for small businesses, at a time they are facing huge challenges with the ongoing effects of the pandemic.

“I have no doubt that this strong support for small businesses has been driven by recognition of the critical role they played in our communities during lockdown. So many firms worked hard to pivot and adapt their businesses during this national emergency, often stepping in to offer useful services, vital products, as well as being a source of practical support and kindness, particularly for the NHS and frontline workers.

“While there is light at the end of the tunnel for 2021, with a vaccine, this winter is still going to be tough for many small businesses and it’s so important that we all continue to support them. This year Small Business Saturday is not just about one day, but all of the small actions that individuals can do across the winter to add up to one big impact.”

Charlotte Duerden, managing director UK, American Express, said: “Small businesses play such a vital role in their local communities and need our support more than ever.  So, it’s truly good news that we’ve seen the biggest ever boost to spending with local independents this Small Business Saturday. What’s even more encouraging is that this commitment to shopping small looks set to continue, not just this month, but for the longer term.”

A grassroots, not-for-profit campaign, Small Business Saturday was originally founded by American Express in the US in 2010. American Express remains the principal supporter of the campaign in the UK, as part of its ongoing commitment to encourage consumers to shop small. American Express is incentivising Cardmembers to support their local small shops with its Shop Small offer.

From 5th to 20th December 2020, Cardmembers will receive a £5 statement credit when they spend £10 or more in-store at participating small businesses. The offer is valid for use up to 10 times, once per participating location, which means shoppers can earn a total of £50 in statement credits. 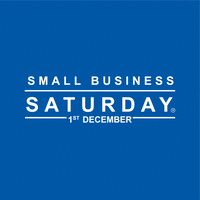 Small Business Saturday UK is a grassroots, non-commercial campaign, which celebrates small business success and encourages consumers to 'shop local' and to support businesses in their communities.

The day itself takes place on the first Saturday in December each year, but with an impact that lasts all year round.