You are a tech founder or dream of a successful career as a VC investor. Imagine finding yourself in a room with one of the absolute legends in early stage investing in Europe. Not virtually. In-person. One hand away. Like good old times but better.

You didn't need to let your imagination go too wild, had you been at #EcosystemGiants where at the end of September, one of the continent's most celebrated venture capitalists, Cem Sertoglu (Co-founder and Managing Partner, Earlybird Digital East Fund) offered candid reflections on his story to success in VC land: from exiting a tech company to building the highest performing early stage venture fund in Europe. Before a room of founders (with an overwhelmingly female majority), live in London.

The event series, #EcosystemGiants, started out at the height of the pandemic, online. When the world went all-remote and the new way of working created new opportunities, and challenges, in an environment that deepened existing inequalities.

"Through the prism of tech, the divide between the very well-connected, well-funded founders and those just starting out was amplified. The serendipitous opportunities to casually bump into someone, or accessing a tighter-knit network slowly disappeared. Did tech really led us to connect with anyone, anywhere? Or we continued to rely on the familiar, and trusted (pre) existing contacts? Rhetoric questions - my point is it became even less likely for ‘outsiders’ to enter the ‘elite VC’ club. The ‘Ecosystem’ project was born with the aim to overcome that," said the host, Tzvete Doncheva, one of Startups Magazine top 21 most influential women for 2021 (see our latest issue here).

And while self-driven, the project was supported by a number of ‘Giants’ in the innovation ecosystem. What do top tier VC firms Partech, Speedinvest, Earlybird, Seedcamp have in common? Other than having incredible teams and track record of backing some of the most well-known European unicorn businesses, all four of them have had founding partners take part in Doncheva's #EcosystemGiants over the last year.

Season 2 opened up with Reshma Sohoni (Managing Partner, Seedcamp), the queen of early stage venture investing in Europe. In a very honest conversation, one of the most influential investors on the continent (featured four years in a row, starting 2017, in the Forbes Europe Midas List), opened up about her experience making it in the world of tech and venture, and how she feels about the concept of ‘belonging’.

And at the first in-person edition of #EcosystemGiants this September, the esteemed speaker, Cem Sertoglu, took to the stage (quite literally, at a lecture theatre room at East London's Innovation workspace hub for startups, Queen Mary Enterprise Zone) to explain why and how he is supporting the development of the innovation ecosystem in CEE/SEE and beyond (one of his most noted investments is the seed round at billion-dollar-company UiPath, which became the largest European software IPO ever listed on NYSE).

In October, the founder/VC audience got to hear from Christoph Janz of Point Nine Capital, a celebrated tech entrepreneur from Germany, who more recently profiled in b2b SaaS venture capital (and is known in the tech innovation ecosystem in Europe/the US as ‘the king of SaaS early stage investing’). You may read some of his thoughts on the subject here and here.

When asked if it is easy to build a startup, both guests appreciated the grit and strength new entrepreneurs exude.

"There should never be a Snap when there is a Facebook. There's a world of incumbents out there with oceans of resources. Your (startup) existence really shouldn't happen. They should be able to kill or destroy you. And somehow they don't. There's all this encouragement and glamorization of entrepreneurship, and I think the economy benefits from it. But if you break it down to a personal level, I'm not sure each entrepreneur benefits from it. Entrepreneurship is tough. Keeping an eye on the practical issues, like where a company's creating value, and how you can transform that into revenues becomes very, very important."

Christoph added that founders have to believe they can beat the odds because statistically, most startups don’t work out.

"Scaling a tech startup is pretty much a 24/7 job. The good news is that to most entrepreneurs, it doesn’t really feel like a 'job'. However, there’s a real burnout risk because the pressure is so intense," said Christoph Janz, Point Nine Capital

What piece of advice would the two most recent speakers give to the young generation of leaders listening/reading?

"I'd remind my 20 year old self that I am playing a long game. It is not optimised for this quarter, or next year. Do the right thing. Plan for the long term. You're in this for a long career. Compromise for short term benefits is usually not worth it," said Cem Sertoglu, Earlybird.

Christoph agreed, stressing that when you get a bit older, and maybe have kids, work/life balance becomes more important.

And find and build a network of people that will support you through this journey. It’s a road hard enough to take alone.

"Lean in on your allies. Whatever little opening you see, push through rather than trying to open closed doors," concluded Reshma Sohoni, Seedcamp

In a place where the community comes first, this format brings innovators and tech investors together, as a way to break down the barriers between close-knit venture circles and outsiders to make the (in) accessible within reach. With the ultimate goal to broaden up access to (venture) capital for early stage female founders.

“I would like my work to bring for a wider access to opportunity in venture capital. I hope somehow, somewhere this project can be a source of inspiration for the young girl who does not dare to believe she can do anything she's set out to do (yes I’m biased in hoping to especially reach women going into entrepreneurship and investing). It is so important to have relatable role models (not me, but the guests from #EcosystemGiants). If you are this young girl, reading this, know that you really are as big as your dreams are.”

To find out more about Tzvete's goal to increase representation of women in the VC and tech industry - at both founder and funder levels - and to support innovations that reflect the diverse population they are to serve get funded, reach out to her here. You may tune into the next #EcosystemGiants from anywhere - an all virtual session with one of the youngest partners in the venture capital scene in Europe, Creandum’s Peter Specht. RSVP to join here.

The format has been supported by startup community-focused organisations Kaiku, ParlayMe , MentorshipHub and of course, Startups Magazine. 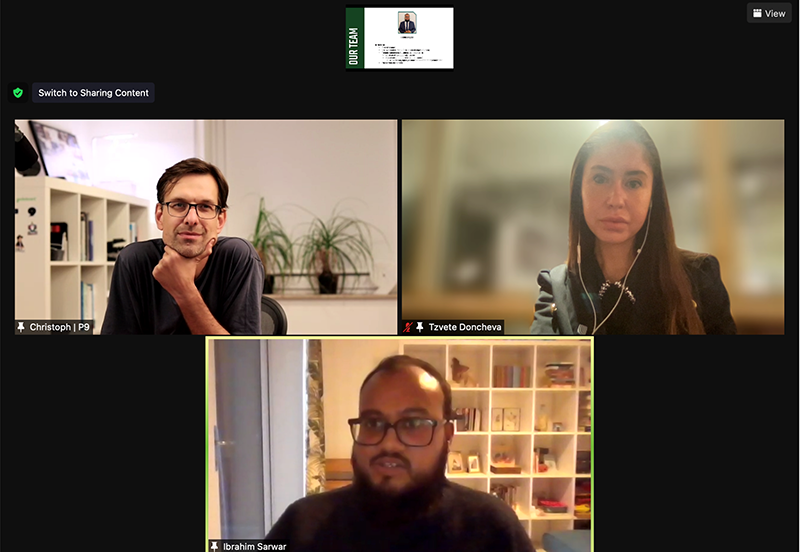 In the ‘3 minute pitch moment’, Ibrahim Sarwar shared his vision for building Kontractors, the marketplace matching outsourced work with highly skilled contractors, delivering a social impact to gig workers. The two previous sessions saw Hristian Nedyalkov (Co-Founder and CEO, Novus) pitching UK's impact banking app that turns every payment made into a force for good and Heidi Lee of Finuprise,  the European 'Robinhood' for the socially-conscious retail investor.