The ninja approach to startup succeess

“At the heart of what people, companies and everyone does is innovation. Innovation is our focus.” This was the opening line from Gary Shapiro, CEO of CES at last year's unbound innovation festival in London.

He explained how amazing the unbound show is, not just for startups, but people too. Like CES, it brings an array of people together with innovation. That is the main focus of CES innovation, what are the policies for innovation.

Shapiro having already written two books on innovation titled 'The Comeback: How Innovation Will Restore the American Dream' in 2011 and then the very well received 'Ninja Innovation: The Ten Killer Strategies of the World’s Most Successful Businesses' in 2013, has just this year released a third 'Ninja Future: Secrets to Success in the New World of Innovation'. The first one had a main focus on policy, however the second one is centred on ninja innovation, something he spoke a lot about at last year's unbound festival in London. Commenting on the title he said: “Mainly because I have a black belt in karate, but also ninjas were these ancient Japanese warriors and what they did besides being outsized is they thought about how they worked best.”

So Shapiro really started to think about what ninjas do, and their qualities, which he pointed out applies to startups, and companies alike. “The main reason I got into ninjas about 30 years ago was the very popular TV show Teenage Mutant Ninjas Turtles. My children watched and then begged me if they could take up karate.”

The concept of a ninja: are you a ninja?

Ninjas do certain things in certain ways. One is they prepare deeply for uncertain things. Shapiro said: “The fact is you need to be prepared for everything, no matter what you’re going to be in that battlefield and you could be on your own, so you need to be able to make do.”

Shapiro stated: “For a startup or a big corporate executive the same rules apply. You need to figure out what you are good at, and what you aren’t and then cover the space.” Diversity is key and Shapiro said it has been discussed at his company for many years. That doesn’t mean there still isn’t room for other strengths from elsewhere. He added: “Diversity is part of succeeding.”

Shapiro explained: “If you are trying something and it doesn’t work you get out of there.” Don’t dwell and keep trying on something that is not there, you need to get out straight away and try again in a different way.

Shapiro said he has worked with many people from across the world and sees some clear differences between the level of big corporate established companies, and startups and beginning entrepreneurs, as big companies often struggle with innovation. So when big companies can come together with entrepreneurs, that is when things really start to work. Companies have another downfall in that often, when they agree to a project they spend a lot of money on it – and Shapiro explained, that is not necessarily a good thing. “In a new startup publication I was reading here at the show (Startups Magazine), it stated that the number one reason startups fail is lack of money.”

Shapiro continued: “Big companies love strategic granting, and sometimes when companies agree to fund something they spend a lot of money and it can end up failing fast and then they have wasted a lot of money.”

One thing that is important to innovation is liberty. Shapiro concluded: “Liberty is a cultural value that is shared worldwide, and it is important as it represents honesty and freedom – freedom to access the internet - a basic yet crucial element.” Additionally he added that flexibility is essential for innovation, especially in terms of your working environment.

Finally a key ingredient for innovation is privacy and the future. The future is so exciting particularly in terms of Artificial Intelligence (AI) but there are issues that could hold it back. For Shapiro the idea of regulating AI could really impact innovation. Shapiro explained: “It is a really important area but GDPR is something the world is struggling with. Europe doesn’t help entrepreneurship with data.” 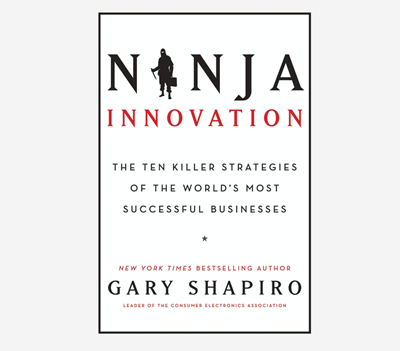 The 'Ten Killer Strategies' of the world's most successful businesses.