Naturally, large and small businesses have innumerate differences in their motivations and capacity to operate. For instance, SMEs commonly benefit from the flexibility imparted by smaller and more focussed teams, with ownership often aligning with management. Conversely, they may have less financial freedom to invest in diversifying or building the kind of economies of scale enjoyed by more established enterprises.

For all of the structural and operational differences, it is striking to observe one significant trend that businesses large and small alike have rigorously pursued over the last decade.

That trend, of course, is the rise of 'green' initiatives.

Increasingly, businesses are declaring their environmental conscience to the public through such initiatives. Committing to recyclable packaging for example, or investing in technology to reduce cardon emissions, all have a positive impact. While this is commendable, there is an obvious financial reason for this: even by 2014, a study by Nielsen found that a majority (55%) of consumers in the UK said they were willing to pay a higher price for products from companies they believed to have a 'positive social and environmental impact'.

Sadly, over the last year this encouraging trend seems to have taken a backseat to financial priorities. Due to the COVID-19 crisis, small businesses in particular have been forced to limit operations, reduce risk-taking behaviour, scale back non-critical operations, or cease trading altogether.

It should also be considered that even in fairer weather, small business can often be reluctant to make bold moves. Research by Warwick Business School in 2011 suggested that “initial investments may outweigh economic advantages”, while firms find it “difficult to estimate” the potential costs and upsides of green initiatives. While established businesses will have resources to draw upon, decision-makers at small firms cannot be blamed for considering marketing overhauls an unrealistic expense.

This prioritisation of survival was only intensified by the arrival of Brexit. Overnight changes in customs rules, alongside an extended lack of clarity over their impacts, complicated matters tremendously. A lack of forewarning over the precise trading conditions meant improvised adjustments of supply chains contributing to a further trade-off between environmental credibility and the economic realities of remaining competitive.

Getting back on track

Given the chronic uncertainty businesses in all sectors have faced over the past year, it is understandable that investment with a longer-term vision fell to the wayside. However, as we begin to emerge into renewed economic stability, it is crucial firms once again seize the opportunity.

A recent survey conducted by One World Express found that more than half of businesses (57%) now feel confident in their understanding of the new Brexit rules. This resurgent feeling of assurance will surely continue apace, and underpin the growth of trading at scale. It is comforting to note that trade is trending upwards following the sharp decline observed on the introduction of the new system. What’s more, the successful rollout of the COVID vaccine has likely reignited UK businesses’ appetite to recommence trading with the EU - particularly as recent reports suggest that fully vaccinated individuals may soon be able to travel to EU countries without needing to quarantine.

ONS figures support this renewed confidence; UK exports and imports with the EU were up 8.6% and 4.5% respectively in March. As a result, businesses can now consider a more holistic approach to their long-term strategy and review where their supply chains could be adjusted to favour a gentler ecological approach.

Initiatives such as investment in low carbon vehicles would be a positive first step. Newsreel footage of “Dover chaos” on Brexit as lorries stalled in unprecedented queues will live long in the memory as a symbol of unnecessary waste. Greater flexibility and confidence can reinforce the marketing value of addressing this.

More broadly, shipping and freight arrangements could be reviewed – with a majority of businesses keen to exercise their environmental conscience, increased demand for greener methods of shipping could see these scale at a rate which makes it even cheaper and more convenient relative to wasteful alternatives.

Of course, authentic change will be key. Clever marketing has appealed to consumers for years, but awareness of the breadth of environmental issues is always evolving - initiatives must be substantive for firms to reap the rewards. The logistical infrastructure has tremendous capacity to facilitate these changes - now firms must take the initiative and place environmental policy at the heart of their long-term business strategy. 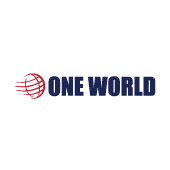 Established in 1998, One World Express has rapidly grown as a private owned global logistics, e-commerce and IT solutions provider.