Popularised in 2014 by Founder of fast-fashion brand, Nasty Gal, Sophia Amoruso, the neologism, girl boss was supposed to incite feelings of strength, empowerment, and confidence.

Many have criticised the term for reinforcing gender stereotypes, undermining the achievements it was supposed to celebrate. What comes to mind when you hear the phrase girl boss?

Sophia’s autobiography, #GIRLBOSS, gained a huge following, with many looking up to her because of her inspiring story. Early usage of the term defined it as attempting to empower women, where it quickly became used as a marketing strategy for writing about powerful women in every industry.

Referring to the female entrepreneur whose success is defined in opposition to the masculine business world in which she swims upstream. Girl boss seeks to pursue power, on a quest for equality, which inspired and lifted many women.

How can it be seen as a positive?

For some, girl boss evokes strength, confidence, and power. It is a symbol of ambition and hustle, demonstrating the achievements of women. What’s more, girl boss is how it feels to unapologetically be the boss of your own life, feel happy in your skin, and live life as your true self.

Girl boss can be empowering, like the ‘that girl’ persona circulating on social media, specifically TikTok. Becoming ‘that girl’ for many means becoming the girl who seems to have her life together, achieving goals and feeling self-fulfilled. At the core of the trend is the idea of bettering oneself.

With this in mind, it becomes clearer why so many people had the same aspirational mindset as Sophia: wanting to become a girl boss, taking control of their life and becoming an incredible working woman with no limit to one’s success.

Effects of using the term

Despite positive connotations assigned with girl boss, many argue it reinforces gender stereotypes, others and alienates women, undermines achievements, and reinforces hustle culture.

Vivienne Neale, Business and Digital Marketing Lecturer at Falmouth University, argues that girl boss is: “One of the cruellest tricks that capitalism has ever perpetrated.”

Vivienne explained that girl boss leads women to believe that once they become women in power, and girl bosses, everyone is going to win, which is simply not the case.

She continued that the whole concept of girl boss is codified: “Girl boss becomes a capitalist aspiration, and a specific vision of empowerment as if somehow, we’ve been allowed to be empowered. You only must look at what’s happening around the world to know its easy for this empowerment to be stripped away.” 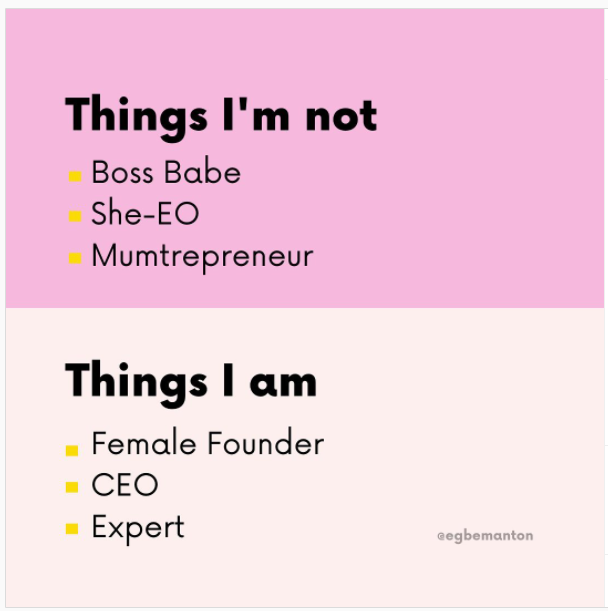 Thinking about the role that women play in contemporary business landscape, women still must battle the fact that quite often, governments focus narrowly on the support they offer, neglecting other policy areas that have a direct impact on entrepreneurship. These include childcare and education.

Although having no personal experience with anyone referring to her as a girl boss, Vivienne deemed the term “extremely demeaning”, believing it sets women up to be shot down.

Many also put girl boss in the same category as other sexist terms, including ‘She-EO’ and ‘mumtrepreneur’, which add to the issue. Such words were intended to address the diversity problem by empowering and enabling women. These phrases, as well as girl boss can be seen to infantilise the role of a female boss, but on the flip side, can be viewed as an attempt to carve out a space in which women can be in charge without having to echo men.

Editor of Startups Magazine, Anna Flockett reaffirmed this: “To me the term girl boss is just highlighting that I am a female, rather than my superiority. You don't often hear 'boy boss' or anything highlighting gender when it comes to men. Why do women have to have their own versions of the word? To me it undermines the authority and dilutes a job role.”

Vivienne believes girl boss has demonstrated the importance of business schools, including Falmouth University, in shaping the discourse around young women entering the business landscape.

“Girl boss drops into one aspect of a dysfunctional society and so for us to get razzed up by it means we aren’t concentrating on the bigger picture, the more important things,” Vivienne continued.

Girl boss culture was supposed to fix everything wrong in our workplaces, including competitiveness, workaholism, and sexism. It was supposed to represent the change and bring it about across all industries. Instead, many argue it has done the opposite, encouraging workaholic, toxic patriarchal structures.

As Vivienne stated: “It’s not that people wanted girl boss to fail, it’s that girl boss failed us, and this is what we need to change.”

The hope for the future is to remove gender stereotyping when hearing the word boss. Although many may choose not to refer to themselves as a girl boss day-to-day, perhaps girl boss is the in between until we become a world where we only have one word, boss. The girl boss is not the answer to the problem, and in some ways perhaps has contributed to it. However, there could be a lesson here for the future.

Seven Tips on Managing Working From Home as a New Freelancer

Mentoring can be the key to greater equality

How can firms win in the return-to-office battle?