Since the Coronavirus outbreak, multiple concerns about the pandemic deepening social and economic inequalities have been raised. The latest ‘Ecoystem’ webinar session brought together leading investors and one of world’s largest engineering and manufacturing companies in a conversation on challenging industry perceptions to break down barriers to VC funding and innovation.

“Education, background, whether someone is a repeat founder – these are some of the criteria that have been used in VC since the beginning of time, but they are not necessarily correlated with the grit or the ambition of the founder and the success of their venture. I am trying to find new ways to understand if a company will be successful in the future, ”said Beatrice Aliprandi, senior associate at Talis Capital.

“There’s often a bias to invest in the two white guys that dropped out of Stanford because that’s worked before. In reality, where you went to school has nothing to do with your entrepreneurial prowess. All it has to do is how good you were in high school. It is a realisation that we have started to internalise ourselves. It’s led us to the belief that great entrepreneurship can come from anywhere and look like anything -whether a founder is sitting in Lagos or Palo Alto, to us it makes no difference," agreed Sheel Tyle, founder and CEO at Amplo.

One of the biggest barriers to entry in venture capital entrepreneurs’ face is believed to be the lack of a direct introduction to an investor.

“Warm intros are the BS. They tend to reinforce clubby mentality. If you are a VC and can get a warm intro from someone you’ve known for a long time it means that you don’t need to go out there, hunting for deals. We’ve deliberately put an open pitch to us on our website to try and solve that problem. About 80% of the founders who applied said this helped them get access to us without a warm intro,” according to Chris Smith, managing partner at Playfair Capital.

Yet the panel agreed that not having a ‘warm way in’ is not the biggest problem.

“A lot of cold reach is just really poor – it’s not tailored, it’s not researched, it’s not short and punchy,” admitted Smith noting Playfair Capital’s recent investment in Continuum Industries came as a result of a very well-targeted Linkedin message.

“My favourite way of sourcing companies is mapping ecosystems and reaching out myself. As I do cold outreach and founders reply, I am more than happy to get back to any good, well thought cold intro email,” said Aliprandi

Venture capitalists too, have had biases projected onto them. 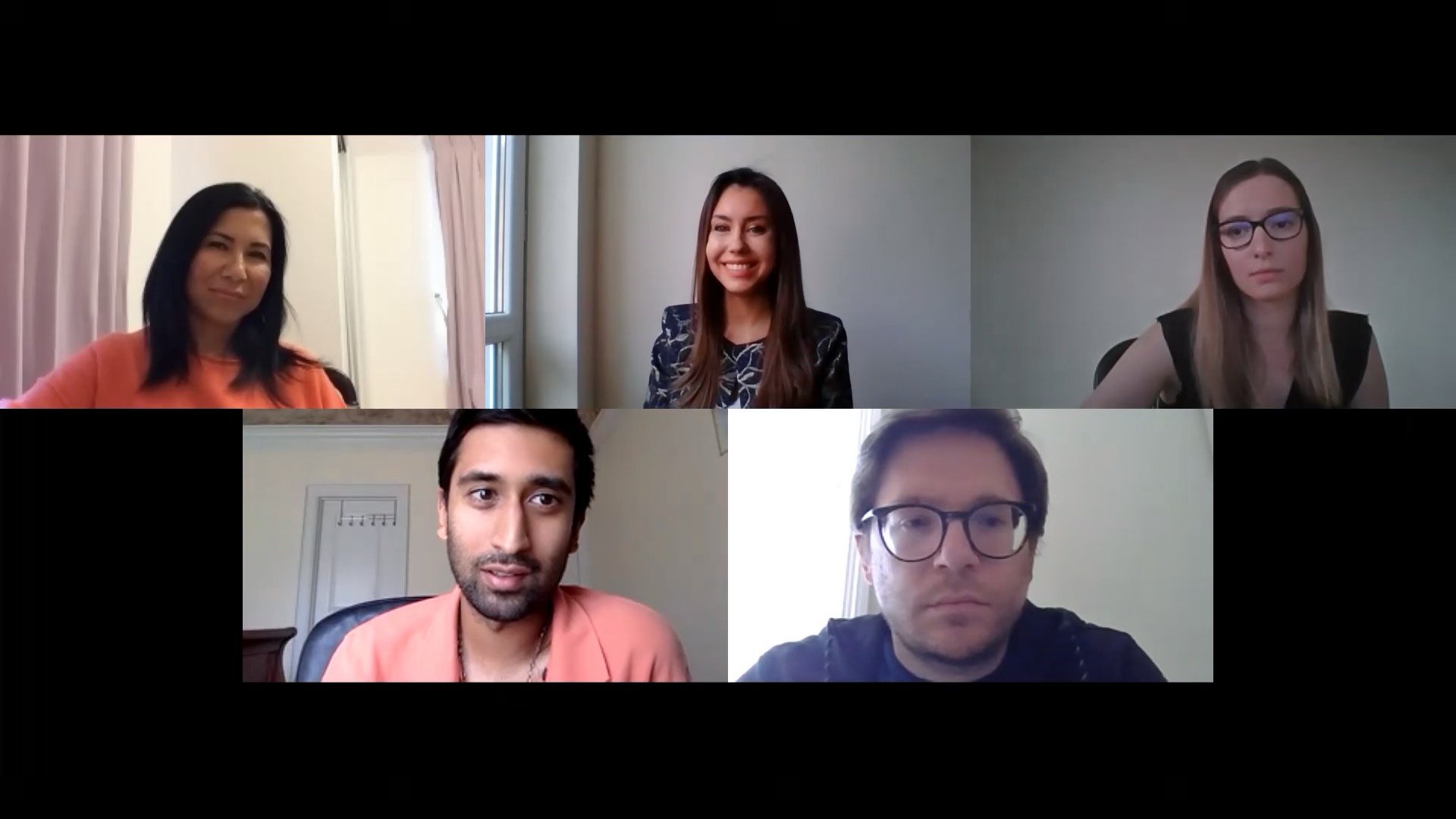 “Because I may be on the junior level, dealing with older entrepreneurs, maybe I’ve had to work a little bit harder to make them understand I was smart enough to interact with them and ask intellectually challenging questions,” admitted Aliprandi.

Will Coronavirus amplify the already existing biases in the corporate world and in venture capital?

“There’s a bull case and a bear case. In theory as you shouldn’t be meeting anyone in person, the world is open to you. In practice it may be that people gravitate more towards what they know and what they’re comfortable with and who they know already. I’m cautiously optimistic,” according to Tyle.

A well-known systemic issue is the female underrepresentation in VC teams, pipelines and investments. How can it be tackled?

“It’s of the utmost importance to have female VCs and diversity of thought on the investors’ side which will naturally reflect on the amount of funding on the operator side. This is a generational change and we start to see a huge number of female VCs which hopefully is translating to female ventures funding volume” according to Aliprandi.

“We have 200 founders and 60 VCs taking part. It is great on one hand but also shows there’s a real problem for women- getting access to investors,” admitted Smith.

Another approach was taken at Amplo.

“We try to highlight our female venture partners a bit more than our male counterparts – to show female entrepreneurs this resource is available and give them a comfort that we have a different perspective available to them,” added Tyle.

An action that has proved to be effective – at least half of the firm's portfolio companies feature a female founder, co-founder or CEO. Tyle also points out an interesting fact.

“When I started the firm, I was looking for the best entrepreneurs, business and political leaders I know that could help me and be venture partners. I wasn’t actively seeking women, it just turned out that the best and smartest people I know were women.”

All panelists highlighted the benefits of diversity in the workplace. Diverse companies are 43% more likely to see above-average profits, which illustrates a clear correlation between diversity and performance.

“We see the huge value of having a balanced team. For me the biggest risk as a VC is group think. I don’t want my IC to be a bunch of people around the table all agreeing with each other,” added Smith.

“They will be titled as ‘tokens’ in the company, because of being in the minority. It’s not a negative connotation but it means there is a higher visibility and pressure to outperform men. Women may experience social isolation – they don’t feel like they’re fitting in,” continued Martin-Vignerte.

An issue which can be addressed by having more diverse role models, as one cannot be what one can’t see.

A point also mentioned by Amani Kiflemariam, Global Head of Risk & Control, Impact Advisory and Finance (IAF) at Credit Suisse, and a co-chair of the BAME (Black, Asian, Multi Ethnic) Network within the organisation, who took part as a guest speaker after the panel.

“I didn’t see many people who represented who I was. That led me to bring in a number of different executives at Credit Suisse and bring this topic on the table. Diversity is great but with it, you count the amount of people you have from different backgrounds. With inclusion, you ensure people are included and their voices are heard. Change can only happen if we all come together.”

It’s a belief echoed by strategy advisor Tzvete Doncheva, who with every ‘Ecosystem’ discussion, tries to highlight the women who are setting a great example with their work.

After the panel, the audience also heard from Francesca Baillieu, co-founder of Associated Podcast, an initiative which puts the spotlight on the diverse junior level individuals at VC firms.

“We create the first coffee meeting, an intro to who they are as an individual and their background to demonstrate the diversity.”- says Francesca.

The speakers highlighted multiple times that it is through initiatives like Doncheva’s ‘Ecosystem’ webinar series that the diversity problem in venture capital and in the corporate world can be addressed.

“Doing exactly what you are doing, bringing together different groups of people from different geographies and different backgrounds is critical. The ultimate barrier is getting them on a zoom call together. Once you can solve that, I feel people realise we are a lot more similar, than we are different. Having these types of conversations forces you to think more critically and go the extra mile to find people who may think a little bit differently than you do," noted Tyle.

“We need to create more social communication, like for example this event, that will really help if we can engage more with the younger generation and try to bring them on board and discuss their problems moving forward,” continues Martin-Vignerte.

"For instance, I've seen the direct positive impact this conversation has had on my younger sister Kalina, who was helping me out with the webinar. It has further exposed her to a career in technology and inspired her to dream bigger." - concluded Doncheva.

The 'Ecosystem' under lockdown webinars featured five sessions that brought together Europe’s leading investors, innovators, corporate players and public sector actors in a forum of a knowledge exchange. An opportunity for participants to share insights, connect in the age of social distancing and challenge each other to achieve positive change.

The common mistake of overlooking the value of investor knowledge

Where should founders look for untapped value? The finance department