Why Early Marketing Matters and the Mindset You Need

Whether you're a startup founder, marketer, or future entrepreneur I want to tell you that 90 percent of startups and young businesses simply don’t survive long-term. Now, where did I come up with that stat? It’s not just something I make up. I’m going to talk a lot in this article about being data-driven in the 'moves' we make as marketers, so know that anytime I throw a number out, it’s researched backed, just like you should be with your marketing.

Being driven by data - rather than our gut or assumptions or our previous projects/careers - reduces our chances for failure. So, some data to back up what I said: in 2019, the failure rate of startups was around 90%, and that’s according to the Small Business Association of America. Boom. Mic drop. On top of that, further research concludes that 21.5% of startups fail in the first year alone, 30% in the second year, 50% in the fifth year, and the list goes on!

You might be asking: “Why do most startups fail?” Well, I’m glad you inquired! The honest truth is that the vast majority of 'companies' are not started with the intention of truly focusing on solving a real problem. Many people start companies with aspirations to make billions, and when they realise it’s not going to happen quickly, they give up. It can often take several pivots, and several years to find the right product-market fit, and if you’re not willing to iterate to get there, you’ll give in. If you’re reading this and you’re developing a new MVP (minimally viable product, google it), you should NOT expect the first iteration to be the dream product that users love and instead should be ready to spend years iterating until you find a product that your market truly needs, loves, and will refer to each other enough to sustain your business. That’s the reality most people don’t realise they’re signing up for when they first change their LinkedIn title to 'CEO and Founder.' Of course, once reality hits them in the face, not many people are truly ready to hustle for years to find said product-market fit. The first startup I was head of marketing at, Dubizzle.com, sold for over $400 million after I spent only a year scaling them across the Middle East, but the founders spent four brutal years on their own before I joined. All the while, their families had been telling them to give up. It takes a ton of time and persistence!  Yes, true product-market fit is the hardest thing to accomplish, but beyond that, it’s ALL about marketing, period. If you’ve got a good product going, and early data shows that people like it, the rest of the battle is finding more of those people.

According to a recent study from Failory.com, marketing problems are the second leading cause of startup failure, behind only finding that elusive product-market fit. Take a look at the graphic below and realise that this means that you are around 15 times more likely to fail because of marketing than you are because of your operations! Let that sink in. 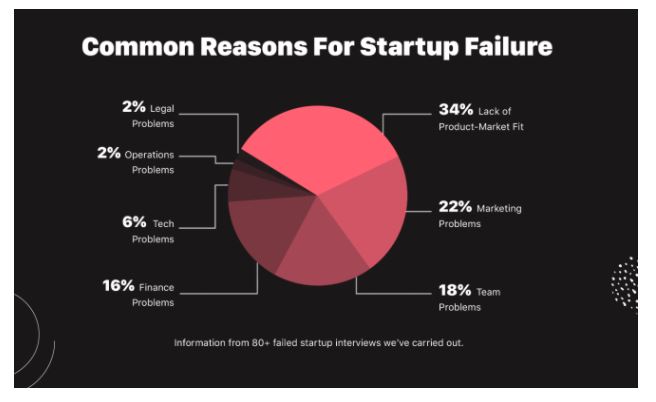 But if it’s so important, then why do so many founders, especially those with technical backgrounds, tend to overlook marketing in the early stages of their businesses? Well, after 15 years, I’ve noticed some patterns that may paint a clearer picture, and because knowledge is power, the more you know about these common errors I’ve seen so many times, the less likely you’ll be to succumb to them. In my humble opinion, and from what I’ve seen over the years, marketing and product development tend to be on opposite sides of the brain, and if you’re reading this, you’re most likely skilled on the product development side. You’ve already spent a ton of time developing a product, and now you need “the goods” from me so you can start driving traffic to it, which is why you splurged on this lovely deep dive into early-stage marketing strategies that work.

You may very well be an exception to this “rule,” but generally, humans intuitively steer clear of things we’re not good at, and so if you’re a fantastic developer or engineer, it’s likely that even talking about marketing makes you squirm a bit. The first reason that I often see founders and business owners mentally deprioritise marketing is that they feel like they won’t perform well at it, and thus it won’t have a big enough impact, so they don’t do it. I’ve even heard founders say marketing didn’t work on their previous failed startup so it’s not an important focus for the next one (clearly, they haven’t seen the above chart, right?). If that’s not the case at your company, great, but there’s another pattern I see all too often I want to address, and don’t feel like I’m attacking you. From what I’ve seen working on over one hundred startup projects since 2006, more often than not is that bootstrapped companies overlook early-stage marketing because they simply think they don't have enough money to do it yet. Period. Marketing is perceived to be costly and therefore shelved until the proverbial “war chest” is assembled. I’ve come to realise many founders consider marketing and advertising to be the same thing, and since “advertising” clearly costs money, they put both marketing and advertising off in expectation scaling via ads after getting investment, funding, or revenue substantial enough to re-invest into the business.

This is wrong on a few levels, and it pains me to my core to see this, time and time again, with teams around the globe. Firstly, marketing is different from advertising. Advertising is essentially paid user acquisition and paid branding campaigns or, more generally, exchanging money for ads that will promote your business.

Paid advertising is, in fact, quite costly, and costs ever more annually, without a doubt. According to Statista.com in their report on average mobile app user acquisition costs worldwide from September 2018 to August 2019, it can cost up to $90 to drive an in-app purchase these days. 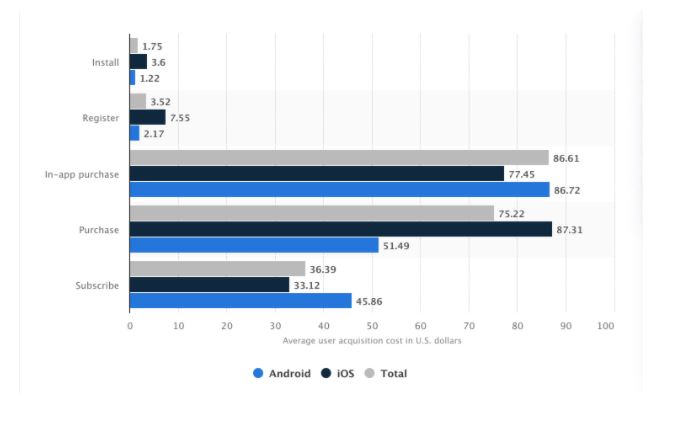 There is more collective data available about mobile user acquisition, but in case you don’t care about apps and think your business is immune, here are a few average customer acquisition costs benchmarked across a variety of industries and multiple devices. (Source: PropellerCRM.)

Here’s a general rule of thumb with user acquisition KPIs (key performance indicators): The more profitable your customer is to you, the more it’s going to cost to find them via ads. Consider real estate, which is one of the most competitive industries for ad space, and you’ll get what I mean. If they’re able to sell one customer, they make a massive profit, so there are lots of people trying it, and therefore, that level of competition drives the market response of expensive CPCs (cost per click).

Now, if you’ve got budgets for big paid advertising campaigns, that’s all fine and dandy, but marketing is so much more than that. Marketing is also any effort you put in to promote your business via organic channels, like content, social, search, public relations, and so much more, all of which we’re diving super deep into in this article, I might add. Growth hacking, to me then, is the art of building sustained, scalable growth when you are truly limited in the marketing resources you have at your disposal. It’s about making magic happen with what you’ve got, rather than waiting for more later. The fact is startups need to get some sort of traction in the early days to impress not only investors but early supporters, first employees, profitable potential partners, and so on. Not knowing how to do those often pesky yet always necessary marketing strategies like your own SEO, content marketing, or PR historically meant you were left with only a few options to grow your business, and yes, they all do cost money.

You could hire a costly marketing agency to do the marketing for you. I know this is a common strategy many founders employ because I own and operate one such agency, and over the years, tons of tech-focused or product-focused teams have relied on us to scale their businesses once they raised capital.

Since 2016, we have provided full-stack marketing and advertising services to dozens of funded startups, as smart hypergrowth companies know that the learning curve to mastering these tools internally could be years, and so it’s very efficient to get started with a consultant who’s “seen this movie before many times” (to quote a previous client of ours).

Is to plunge straight into building an internal marketing team, often spending months and thousands of dollars on recruitment without finding the right culture fit. Some companies truly believe that everything should be in-house, and that’s totally fair. I’d like to consider myself and my GrowthExpertz team an extension of the companies we work with, rather than an outsourced consultancy, but the fact remains that most companies do put off marketing until they have the human resources to focus on it. According to the U.S Census Bureau, in 2015, startups created over two million jobs in the U.S. alone. That means they still love to hire employees.

Now you might be asking: “So, what’s the third option?”

Do nothing. Seriously. Because both options cost so much, many early-stage companies simply overlook marketing altogether until they have funds to do one of the two options I mentioned above and that, alone, causes many companies to fail because when it’s finally time to scale, they have a massive disadvantage and just too much to do to get any of it successfully done. Think about what happens when you put off your laundry, it just keeps piling upright? Same theory here. Start sooner, so you know what needs to be focused on later.

On top of that, many product-focused teams overlook marketing because they truly believe their product is going to market itself. Several banner companies in the Valley that were indeed founded by tech-focused founders have scaled without the use of traditional marketing, like the RobinHoods, the ClubHouses, and the like, and because of those “poster boys,” many founders think they can replicate their successes without a real focus on marketing. The truth is, that’s a moon shot, and those companies got a TON of free PR in the early days, which is something we are absolutely going to dive into (in Chapter One, actually).

So how do you succeed? You prioritise growth and marketing from the very beginning, even if you’re just at the idea phase or pre-product. I’ve been promoting this to startups since 2010, when I was the original Head of Marketing at Dubizzle, long before the phrase “growth hacking” existed. I’ve been teaching startup founders that there IS, in fact, another option. Marketing is not the same as advertising and in fact you can start “growth hacking” your marketing from day one, even if it’s just driving qualified traffic to a landing page to get potential prospects to sign up to beta test your product when it is ready. Instead of waiting, for when you’ve got more money, or when you can afford to outsource it, or even wait to run ads, you can indeed learn how to do several key marketing functions yourself, inside of your normal schedule, and if you’ve got the discipline, you can spend much less time than you thought at those beginning stages of your business, setting the “marketing foundations” for scalable growth via nearly a dozen different channels. Step one is setting up your analytics, and blocking time on your calendar to start building some “small bets” in marketing, focused on organic channels. If you start there, now, and not later, you’ll be much less likely to fail. Good luck.

How to Make Strategic Thinking Work for you

How to build brand loyalty

Why B2G Marketing is the Perfect Choice for Businesses in 2022