Tech startup, Isotropic Systems has announced its partnership with diversity and inclusion consultancy, Inspired Human. Perrine Farque, Founder of Inspired Human and diversity and inclusion expert has partnered with Isotropic to help the organisation drive further diversity in the tech sector. An ambitious programme has been agreed involving the CEO’s personal commitment to double female representation in the workforce within the next 12 months, kicking off the programme in Q4 2020 the company is making huge strides to close the gender gap in the tech sector.

“With only 17% of UK tech workers being female and only 11% of women in senior leadership roles in tech, the tech industry has long been recognised for its gender diversity problem. Beyond the under-representation of women, it is the gender pay gap that is creating inequalities in Tech: men in high-tech companies earn 25% more than women,” said Perrine Farque, Founder of Inspired-Human and D&I Expert.

By partnering with diversity agency Inspired Human, CEO John Finney will leverage their collective experience from the Tech industry to achieve gender parity at Isotropic. Finney kick-started the programme with a series of diversity workshops hosted by Inspired Human and targeting his leadership team and people managers.

Standing out from the crowd in the startup industry

“Only a quarter of startups (26%) are actively trying to increase diversity within their leadership teams, according to Silicon Valley Bank. Only 43% of startups surveyed said they had company-wide diversity goals, while fewer than one-in-five had these goals for executive positions. It is great to see a tech leader take on a personal commitment to set aggressive diversity goals,” said Inspired Human, Founder Perrine Farque.

The training will focus on equipping the top leadership team with the knowledge and skills to approach all aspects of business development with diversity and inclusion in mind. Isotropic is looking to work on a long term diversity and inclusion programme to ensure it meets not just its current D&I goals but also ensuring it evolves as business overtime.

Not just a moral imperative but a competitive advantage

Inspired Human will work with Isotropic’s top leadership team to articulate the business benefit of gender diversity to further their commitment to tackling the lack of female representation. Research from Morgan Stanley found that companies with a higher gender diversity index had better stock performance; A Gallup study found that business units that were more diverse had higher revenue and a BCG research showed that companies with greater gender diversity among their management team had higher operating margins. A diversity task force has been appointed in the Reading HQ to monitor the progress against the new diversity goals.

“We believe that attracting and retaining diverse employees will allow Isotropic Systems to be more innovative, to open up new markets and to achieve greater productivity. We are committed to becoming a role model in the Technology industry by leading by example. Being a finalist in the Microsoft Diversity in Tech Awards Cultural Inclusion category confirmed our commitment to diversity and inclusion.” John Finney, Isotropic Systems Founder and CEO. 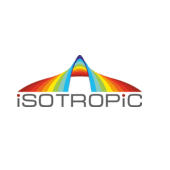 Isotropic Systems Limited (ISL) is developing the world’s most spectrally efficient, low profile antennas that are con-formal, multi-band and electronically steerable. The company’s team of industry experts and scientists have reached a major breakthrough in technology and innovative antenna design. ISL is privately held and headquartered in London, England.

ISL’s antenna will be the first truly ‘broadband’ low-profile antenna with fully electronic beam steering, easily scalable to effective apertures and can be designed to match almost any desired form factor. Designed for satellite broadcast, VSAT, microwave, multipoint wireless and 5G broadband communications, the antennas are low cost and have no moving parts to adhere to the stability requirements of mobility.