The one button communication device designed specifically for seniors

No Isolation  was founded with the aim of reducing loneliness and social isolation through the creation and implementation of warm technology. Following the success of its first product, the AV1 telepresence avatar, designed to tackle loneliness amongst children and young adults affected by long-term illness, the company brought its second product, ​KOMP​, to the UK in 2019. KOMP - a one button communication device, designed to connect seniors with their wider family unit - has been bought by 3,300 families across Europe.

According to Age UK, 3.6 million older people in the UK live alone, with 1.9 million reporting feeling ignored and invisible. Furthermore, The Alzheimer's Society reports that there are over 800,000 people in the UK aged over 65 who have dementia: typically struggling more than others to learn how to use new technology. For these groups, communication is typically offline: either face to face or via the phone. Modern day communication devices and social media mean that the younger generations are able to communicate instantly, via many mediums - messages, videos and voice notes can be exchanged within seconds. No Isolation wanted to take the most useful elements of social media and introduce them to the senior population, in a product that would be designed specifically for them.

No Isolation worked with seniors, families and designers to understand exactly what features KOMP needed to work for its target user. Modifying existing technology wasn’t an option - No Isolation learnt that being exposed to a new communication tool without prior experience could be frustrating and initial failures, discouraging. As such, KOMP was designed to allow users to seamlessly receive messages, images and calls, rendering pre-existing or learnt digital skills unnecessary. By removing all usernames and passwords, KOMP is immediately easy to grasp, giving seniors a sense of mastery over a piece of technology. During the research stage, the team also learnt that a lot of seniors experience leathery and dry fingertips when they grow older, due to decreased blood flow, making it difficult for them to use a touchscreen. As such, one large, graspable button was added to ensure ease of use.

By combining these elements with a high-resolution screen and quality speakers, KOMP was created, ensuring seamless communication within the family, while focusing on the needs of seniors. The screen is placed at the senior’s house, and family and friends can connect and share content through an app. When the KOMP is turned on, the user will receive the messages, video calls and pictures sent throughout the day. 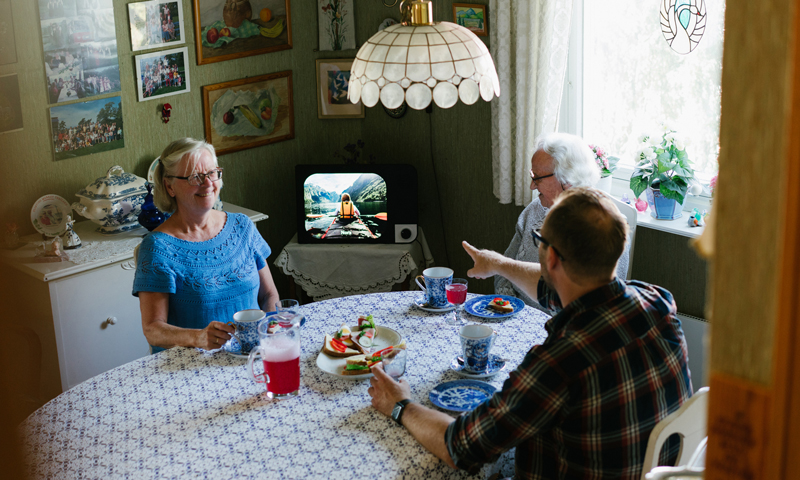 Karen Dolva, ​co-founder and CEO of No Isolation comments: ​ “As a company , our goal is to make sure no one has to suffer from loneliness. We know that many seniors live alone and would like to have more contact with their families and friends. With KOMP we want to bring all of the most magical aspects of modern-day communication between all family members, across all generations. In my own experience of using KOMP with my grandfather, I found that I was able to share so many more meaningful moments with him – images of my new home that he wasn’t able to visit, a snap of me having lunch with colleagues and so many more. Using KOMP he was able to be a part of everything I did, filling the time between our monthly visits with near constant communication. By Creating KOMP, want to ensure that seniors feel they are an active part of their children’s and grandchildren’s lives, and to stop them feeling lonely, even when they aren’t physically with their families.”

In October 2018, KOMP won the NESTA Smart Ageing Prize, awarded to products and services using innovative digital technologies to support older people and allowing them to actively maintain their social life. Furthermore, a 2019 research report on KOMP by Oslo Metropolitan University showed that KOMP is suitable for seniors with a range of health challenges, including cancer, poor hearing, and dementia. The report concluded that most relatives felt that KOMP reduces loneliness and results in greater contact between family members and seniors.

KOMP was first soft-launched in Norway in December 2017, to an overwhelmingly positive response from users. Now, 3,300 KOMPs have been sold to families in Norway, the UK, Sweden, Denmark and The Netherlands. More than 25,000 people across the globe use the KOMP app to connect with their older  relatives.

When designing KOMP, No Isolation knew that they had to create a communication device that was simple to use and that was different to the tablets and computers currently available on the market. As such, KOMP’s key features include:

Just like the device, the KOMP family app is intuitive to use:

KOMP is very easy to set up, relying on a WiFi connection in the home. However, if the senior does not have WiFi, a mobile broadband connection is also sufficient to start using the device. KOMP can be purchased for £599, and delivered within 2-4 weeks. The KOMP app is compatible with smartphones and tablets operating iOS (9.0 or later) and Android (4.4 or later).

In October 2019, No Isolation launched KOMP Pro for care providers in the Nordics - an alternate version of the KOMP Family software which offers care homes additional functionality including reminders, a dementia friendly calendar and clock. Currently, more than 40 Nordic municipalities have more than 500 carers using the tool to send residents medication reminders, share daily schedules and keep in contact. Families can still use the KOMP Family software to send photos and messages to, and video call with, their relatives. KOMP Pro was made available in the UK in February 2020.