We’ve all wondered how to crack the world of Twitter. How much should I tweet? Am I tweeting too much? What time should I tweet to get the most engagement? If you’ve ever been curious about how tech giants like Elon Musk Jeff Benzos compare on Twitter, then you’re in the right place.

Of course your Twitter activity may be slightly different to Elon’s, but who doesn’t want to know the logic behind his Twitter presence? 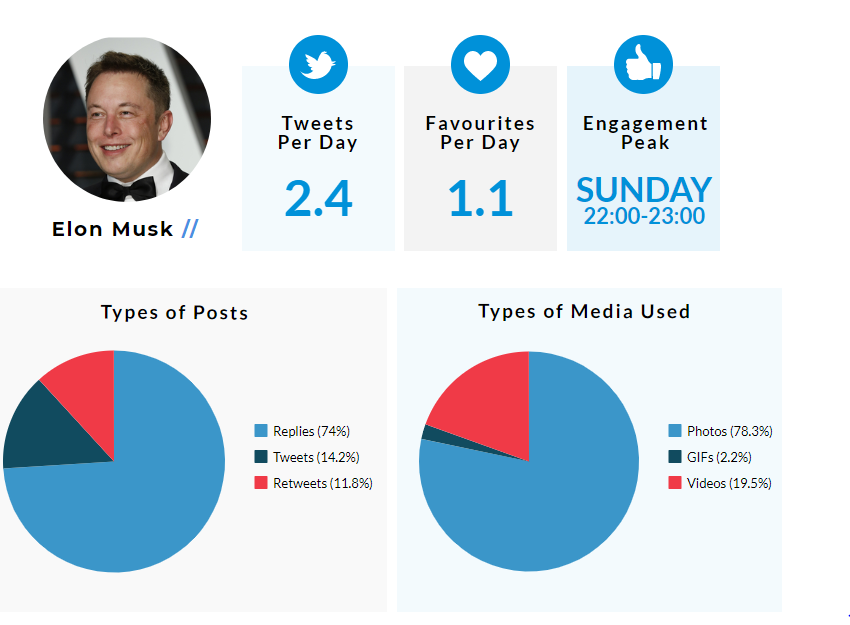 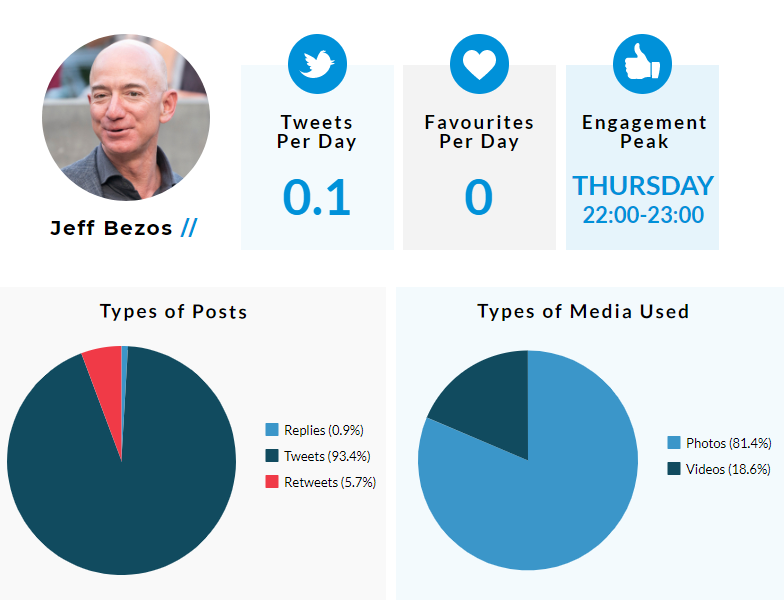 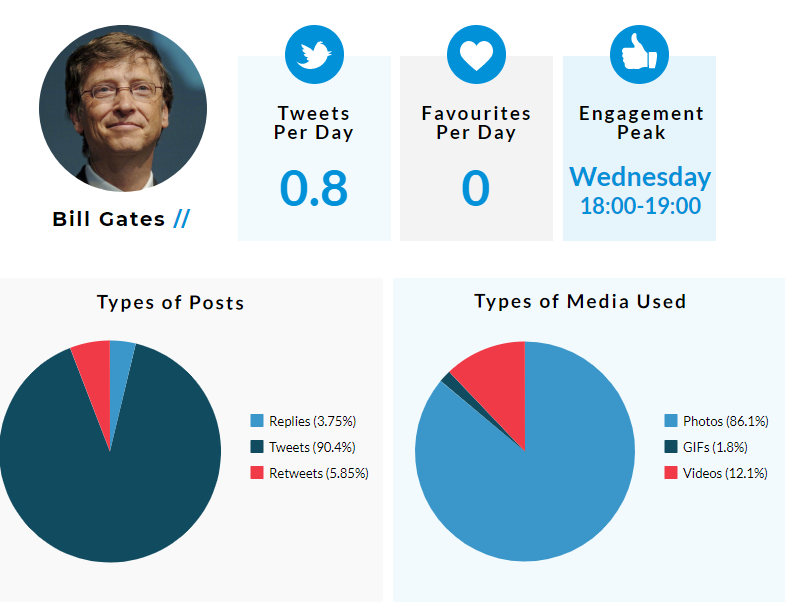 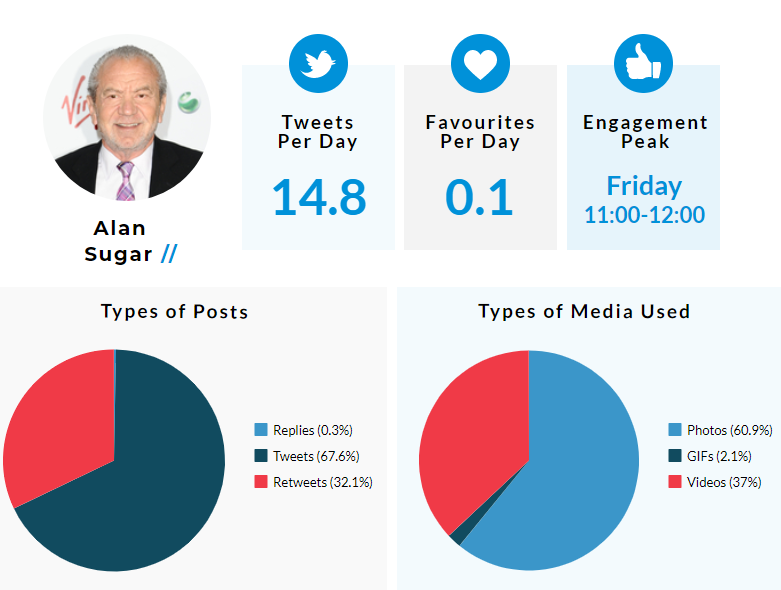 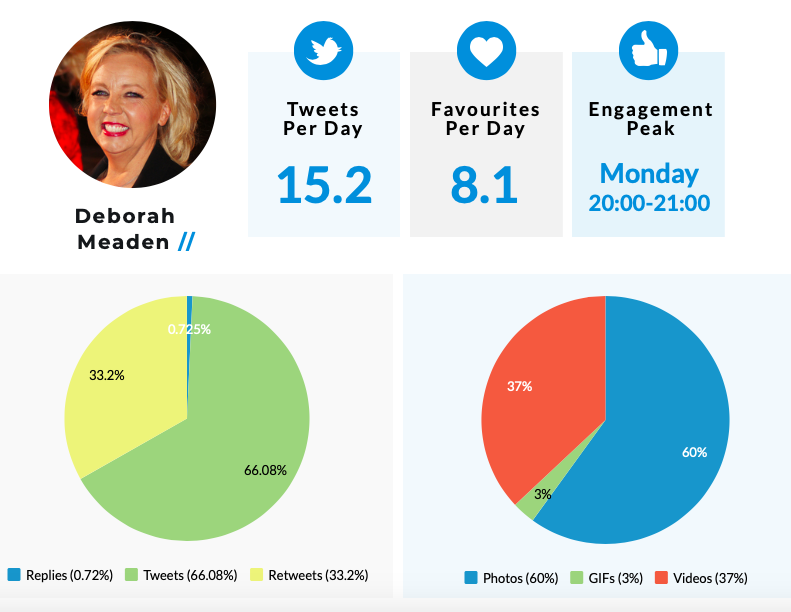 If you don’t follow Elon Musk on Twitter, you should know that he’s active on twitter and often puts out content that is different to most. Jeff Bezos isn’t as active as Elon Musk as he only tweets 0.1 per day and never favourites anything. Jeff’s twitter activity is the polar opposite to Elon’s. He has only 0.9% replies and 93% of his posts are his own content. Maybe Jeff just doesn’t like anyone else’s content?

Bill Gates Twitter activity is fairly low with 0.8 tweets per day and no favourites. Just like Jeff’s, he prefers to push his own content out there rather than reply to his mentions.

The main difference between the three tech giants is Bill’s use of hashtags. Jeff and Elon use hashtags to promote their businesses while Bill uses hashtags that are often aimed at charitable causes.

What about the British business industry? Lord Sugar sends out a staggering 14.8 tweets a day on average. His replies are near nonexistent, but he does like a retweet now and then.

Deborah posts even more tweets a day than Alan Sugar with an average of 15.2. With a healthy share of retweets and tweets, it appears that she doesn’t like to reply to users much. However, unlike many on the list Debroah does like to use the favourite feature with an average of 8.1 per day.

The main common ground between all entrepreneurs across different industries, was that they prefer to push out their own content to their following, rather than engage with them or retweet. It definitely seems as though it’s the more time conscious way to use Twitter.

There was also a prominent commonality of using photos as the primary media type. Images are definitely a way to stand out on a Twitter feed when competing for engagement. Maybe a picture really does say a thousand words?

What do they talk about?

Terminology that you’d expect from entrepreneurs such as money, power, job, plan, task and deal used far less frequently than the positive terminology. The entrepreneurs within the list weren't just talk of themselves though. The words team and support were frequently mentioned throughout. It’s clear here that it’s better to share positivity as a successful entrepreneur in 2020.

For data on other industries such as food, fashion and music entrepreneurs visit here.

Use social media to grow your eCommerce business

Connecting The Dots With Marketing