Green energy out of the blue

As the world strives to decarbonise the way we live, travel, and work, there is an urgent need to rapidly increase the generation and use of electricity from renewable power. Today we can successfully capture energy from the sun, wind and even tides, but we have not yet succeeded commercially in harnessing one of the largest green energy sources on earth – our ocean waves.

It’s estimated that worldwide, there is more than two terawatts of wave power around our shores. If we could harness just one percent of that resource, we could power 50 million homes and save more than 50 million tonnes of CO2 annually. One company looking to tap into this resource is Edinburgh-based Mocean Energy, a startup utilising numerical modelling and optimisation, rapid prototyping and tank testing to harness the power of the waves. We caught up with Founder and Managing Director Cameron McNatt to find out more.

Originally hailing from Maryland on the east coast of the US, Cameron came to Scotland to undertake his PhD at the University of Edinburgh, a world-renowned research centre in wave technology. However, despite a boom in green energy during the early 2000s, the renewables sector hit the skids soon afterwards and saw several companies specialising in these emerging technologies go into administration.

This prompted the Scottish Government to take action to make sure that the country didn’t lose its edge and see all of that know-how and expertise dissipate into other industries and countries. “They formed a funding body called Wave Energy Scotland, which is a subsidiary of Highlands and Islands Enterprise,” said Cameron. “It was set up under a specific and relatively unique funding mechanism called pre-commercial procurement, which meant that they issued funding calls for what amounted to R&D contracts.”

This meant that projects could be 100% funded, rather than just receive a percentage (as seen with grants). Wave Energy Scotland also had a specific mandate to help develop wave energy, which was timed really well from Cameron’s perspective. “I was just finishing my PhD, I was disappointed with what had happened in the industry, but these new funding calls felt like a really interesting opportunity.”

It was then that Cameron met his co-founder, Chris Retzler, who had over a decade’s experience in the industry, extensive technical expertise and a passion for the technology.

“We had some ideas around how we could use software and AI optimisation to improve the hydrodynamic performance of wave energy converters. We wrote some code, ran some simulations, and got some results that surprised us.

“What we were looking at was the hull shape and geometry of the wave energy converters, and how we could modify that. With wave energy, the more your system moves, the more energy it is generating. So, if you can make something move more you are going to generate more energy.”

Cameron and Chris came up with new concepts for these hull forms, and so founded Mocean Energy. The pair were also successful in applying for an afore mentioned Wave Energy Scotland funding call – and were one of eight companies to be accepted.

“The interesting thing about Wave Energy Scotland is that they have stages that the eight companies pass through, from a stage one starting point of having a project at low technology readiness level (TRL) development,” Cameron added. “We passed through all these stages, and in 2019, we were awarded stage three - a £3.3m award to build a prototype of the concept.”

This significant amount of funding enabled the further development of Mocean’s technology and the operation of the business. In parallel Cameron started looking at the business model and the market that the company were aiming for. Typically, wave energy companies had previously been focused on a utility scale business model, where large farms of machines would be built to generate lots of power - similar to the blueprint of a wind farm.

However, this approach is fraught with risk, as Cameron explained: “It is a logical business model, but the problem is that new technologies are expensive and the ocean is a really tough environment for large machines to operate. So, it was hugely risky, and you simply couldn’t get investment for that kind of business model five years ago.”

Consequently, Mocean began studying other applications where wave energy could have a unique value proposition, and as such, discovered the oil and gas sector. This may seem something of a contradiction when talking about renewable energy, but Mocean saw this application as a stepping stone. “If we can develop a product here, we can use that to grow the business and enter other markets and eventually get to the utility scale model,” Cameron added.

“We were successful in participating in an accelerator called TechX, which is run by the Oil and Gas Technology Centre (OGTC). So, I spent a summer up in Aberdeen getting to know the oil and gas industry and working out our value proposition. This opened a lot of doors for us.”

Getting electrical power to oil and gas installations is hugely problematic. The logistics of transporting and installing long umbilical subsea cables in remote locations in the sea is expensive, and the underwater cables can fail. Instead, Mocean’s concept is to use wave energy to provide power to these remote subsea installations - licencing the IP to larger OEMs that already operate in the industry, who will build the technology and sell it to customers.

“In 2019 the energy transition really started to take off and oil and gas companies were beginning to look at how to reduce their carbon footprint and use renewable energy. So it felt like there was a natural fit,” Cameron added.

Cameron added that when compared to other renewable energy sources, wave energy has seen relatively little investment, and any developments have been primarily at the prototype, pre-commercial stage. This is mainly due to cost and complexity – it is easier and far cheaper to install wind turbines or a solar farm on land, rather than at sea.

“Therefore, one may ask why bother doing wave energy in the first place,” Cameron added. “The reason is related to the diversity of the supply of energy. It’s beneficial to grid operators to have different sources of renewables – so if it’s not a sunny day or you don't have the wind for example, then maybe you could have a supply of wave energy instead.

“Wave energy is also very predictable. When you’re talking about large ocean swell on the west coast of Scotland or the south east of England, for example, those waves are generated from storms that originate from the middle of the Atlantic Ocean. These storms generate big swell that travel across the ocean, losing very little energy. You can actually predict incoming waves very accurately compared to some of the other renewable sources of power.

“In addition, for the application that we’re focused on, oil and gas, more traditional renewable energy sources simply aren’t an option. The oil and gas sector deals with extremely remote locations out at sea, and these are places where a floating wind turbine, for example, would just get trashed by the waves, it wouldn’t be able to survive in that environment.” 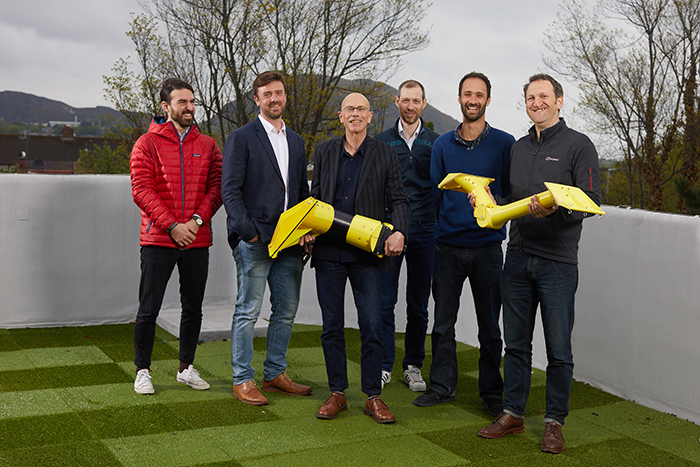 Mocean is currently progressing prototype plans for its two core technologies – Blue Star and Blue Horizon. The Blue Star wave energy converter will provide reliable, affordable renewable energy to power a range of subsea applications – from control systems to ROVs and autonomous underwater vehicles. This small-scale device is in the design stage and will provide continuous communications and green power generated by waves and stored in batteries.

The company are also developing a much larger hinged-raft wave energy converter – known as Blue Horizon – based on the same principles as Blue Star. This machine will deliver grid-scale power and is designed to be deployed in farms off the coast. Blue Horizon’s design has already undergone rigorous tank testing and computational modelling.

“Our prototype development got delayed by COVID, but we’re just finishing up now and it will be taken up to Orkney to the European Marine Energy Centre for a first round of testing,” added Cameron.

“We are also running a project, funded by the OGTC, that will integrate that prototype with some demonstration subsea equipment. This summer will represent a really exciting opportunity for us to demonstrate our technology, and we have a number of customers that are already engaged in these projects to give us feedback on what they’d like to see in those demonstrations.”

Cameron highlighted that if you are the only player in a particular market then it is probably a bad sign. So, there are several companies developing wave energy solutions. However, Mocean’s USP is that its machines generate more power for the same size. “Because we have developed them using our AI optimisation software, they’re much more efficient than other machines, so you can build a smaller system, which will cost you less. They are easier to handle and deploy, which will save money still further, reduce risk, and improve health and safety.”

Mocean has also placed significant emphasis on reliability and survivability. When operating in offshore environments, if things break or fail it is very expensive to fix, which can undermine your value proposition. “We've developed very simple direct drive generator systems which are really minimising the number of moving parts,” Cameron continued. “We’ve also done a lot of testing in wave tanks and numerical modelling to prove that the system can survive really extreme seas, and we’re going to get to test that even more with the real thing this summer.”

Mocean Energy has built an expert team combining scientific principles and real-world experience to develop new technologies which can harness the power of waves – and accelerate the transition to a zero-carbon world.

The company's approach utilises numerical modelling and optimisation, rapid prototyping and tank testing – allied to hard-won ocean experience – to deliver wave energy machines that produce high levels of power for their size and work in some of the world’s harshest environments.