Decline in the UK’s small business revenues largest since May

In October the UK’s small businesses experienced their largest year-on-year decline in revenues since May, according to the latest customer data from the Xero Small Business Insights (XSBI) programme in partnership with AlphaBeta (part of Accenture).

Small business jobs rose, but still remain below pre-crisis levels, according to XSBI, which is based on anonymised and aggregated data of hundreds of thousands of customer records. 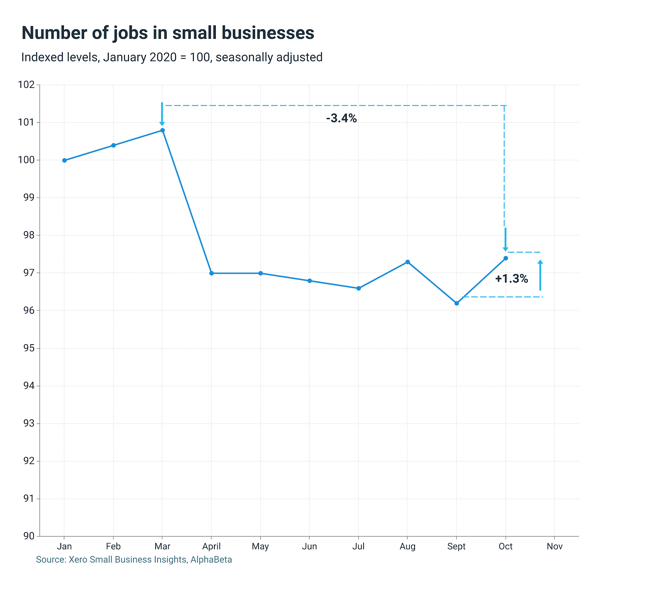 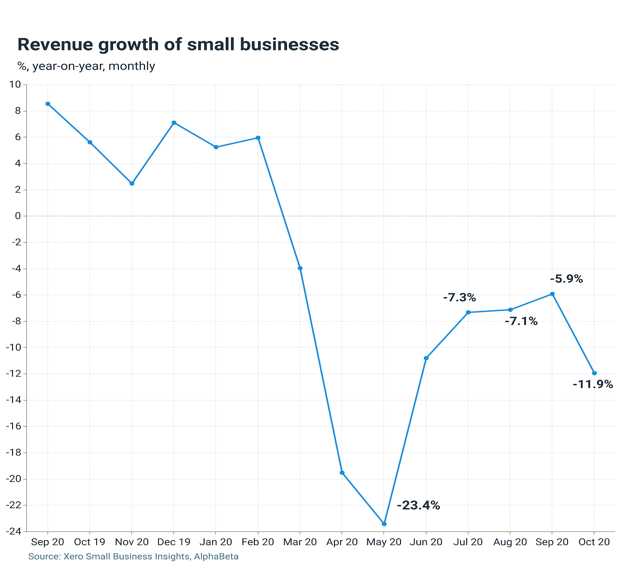 Impact of local lockdowns on revenue

Small business revenues were 11.9% lower in October than 12 months earlier, representing a deterioration from September where they had improved to be 5.9% lower than September 2019. This drop is most likely due to the introduction of the local tiered restrictions across much of the country, reversing the partial recovery seen previously.

With sales already stunted, there is a possibility revenues could weaken further in November as England spent the month in a nation-wide lockdown.

Small businesses in Scotland and Wales saw the largest decline in revenue than seen in the previous 12 months (-15%) due to ‘circuit breaker’ lockdowns. The south west saw the smallest impact on revenue of -5%, followed by the east of England and the south east (-8%).

All industries experienced lower revenues than in October 2019, including retail trade which had recorded four months of positive growth prior. The weakest sectors remain arts & recreation and hospitality, both down 36% (y/y) in October.

Gary Turner, Managing Director and Co-founder of Xero, said: “Despite the current lockdown ending this week, continued restrictions and Brexit uncertainties suggest that the worst is still to come. This will sadly bring with it an even sharper decline for smaller businesses. It’s going to be a long winter, and these resilient firms need our help more than ever before. The future of the UK’s recovery depends on it.”

The importance of paying on time

A separate study carried out by Xero shows that 59% of small business owners were affected by corporate customers increasing the length of their payment terms this year, and the same number were asked by their bigger clients to cut their fees and prices.

“Despite some improvements to payment times, we are still hearing about some of the shocking payment requests that are being made. Late payments affect cash flow and businesses won’t survive if they can’t keep a grip on it,” added Turner.

Despite uncertainty around the furlough scheme and local lockdowns, jobs grew by 1.3% amongst small businesses in October, the biggest monthly rise since the onset of the pandemic. But they still remain 3.4% below pre-crisis levels.  As the second national lockdown affects millions of workers, it is unlikely we will see sustained job gains in the coming months.

Scottish small business employment was also found to be most heavily impacted (-5.6% lower than pre crisis levels), while the east of England was the only region to experience employment growth of 0.4% between the start of the crisis and October.

More information on the October metrics is available in the XSBI Update here.