As Crowdcube and Seedrs merge – what does it mean for equity crowdfunding?

When it comes to equity crowdfunding, the go-to platform for any European investor, young company or growth stage business is either Crowdcube, Seedrs, or both. In the first half of 2020, the two platforms topped Beauhurst’s State of UK Crowdfunding report, with similar, impressive performances. Seedrs closed 95 deals and raised £49.7m, while Crowdcube secured 97 deals and generated £48.5m  – all throughout the COVID-19 pandemic.

Behind the figures, both platforms have acted as a springboard to success for thousands of innovative companies offering exciting and forward-thinking products, services and business models. At TribeFirst, we’ve been involved in over a hundred of them, helping raise more than £42m and shaking-up several markets. 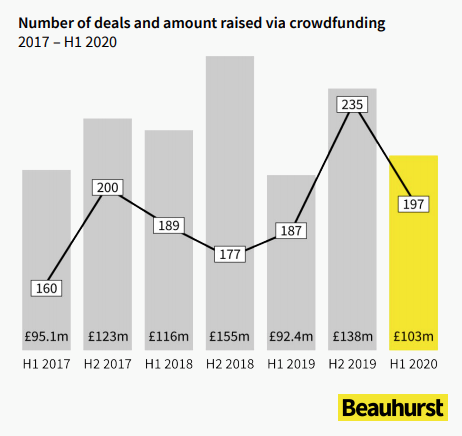 This week we heard that Crowdcube will be merging with Seedrs. Crowdcube’s shareholders will own 60% of the new super platform, while Seedrs’ counterparts will own 40%. It could create the world’s largest private equity marketplace, valued at a massive £140m.

But with both Seedrs and Crowdcube performing strongly (these are the platforms that facilitated hugely successful raises for the likes of Revolut and Brewdog, after all) what’s the need for a merger?

In truth, we weren’t all that surprised by the news. For profitability and overall market impact on a global stage, both platforms will benefit from an economy of scale, hopefully enabling them to help many more innovative campaigns to excel. That being said, whilst it wouldn’t have been a surprise to see the big players hoover up smaller platforms in new territories or niches, a merger of Europe’s two biggest platforms is a huge deal.

This coming-together will allow them to combine their best features – and the minds behind them – to create a mega platform which will be, we expect, greater than the sum of its parts. What’s more, the combined impact of both companies should give them an advantage in their mission for global dominance, and we anticipate this will involve a surprisingly late foray into the nascent US market.

But what will the merger look like? Will we be looking at SeedCube? Or Crowdrs, perhaps? And, what will it mean for investors and company founders?

Both platforms have worked hard to form distinct brands, with engaged communities in the hundreds of thousands. We expect the majority of their existing investors to embrace the merger, and the increased roster of investment opportunities brought by it.

However, it will be up to both Seedrs and Crowdcube to listen to their current stakeholders and understand what hopes – and reservations – they have. While many of these investors will be active on both platforms, others may have an affinity to one and will need convincing about the merger.

Investors and company founders alike may have concerns that their choice is becoming limited. Direct competition usually keeps fees in check and pushes parties to outdo each other on the strength of the product. However, while founders no longer have an obvious alternative for equity crowdfunding in particular, there are still traditional private equity channels of HNWIs, Angel syndicates, venture capital, family offices, funds and private equity firms, and in terms of competing platforms, rewards crowdfunding, P2P lending and companies like Envestry that will provide regulatory sign-off on your own equity crowdfunding campaign. In essence, now a founder only needs to decide which route is best for them, rather than which route and provider.

Conversely, a merger would also eliminate the race to the bottom on price. At their combined scale, they may be able to find the efficiencies that have plagued profitability so they can focus on growing a better, healthier ecosystem.

The merger will no doubt be scrutinised by the Competition and Markets Authority before it’s able to go ahead.

Whilst these two are the largest though, it’s worth remembering that Seedrs and Crowdcube do have competition from others like Envestry, Invesdor and Funderbeam, and companies and investors will still have other options in both traditional and alternative finance. Such factors should ensure that all equity crowdfunding platforms keep themselves in check.

If the merger goes ahead, we’ll hopefully see a bigger, better platform benefitting from the greater number of investors and companies. Other products may increase in viability. Both platforms are looking at future liquidity, Seedrs’ via its secondary marketplace which launched three years ago, and we think it will be welcomed by Crowdcube investors. Crowdcube’s recently introduced version, the DCO – or Direct Community Offer – is a form of direct IPO listing for the private markets.

These initiatives allow later-stage companies – including P2P lending platforms – to access new funding opportunities. While Crowdcube’s secondary market is accessible only to its members, Seedrs extended its offering to all private businesses earlier in September.

This means that founders, employees and early investors can realise secondary liquidity without having to wait for an IPO or exit event. If the new mega platform’s secondary marketplace is kept open to all private businesses, it will be bolstered by a huge roster of innovative companies.

And should these two formidable platforms merge as planned, we can only speculate what other exciting new additions we’d see on SeedCube/Crowdrs. For the world of equity crowdfunding and business in general, it seems we have exciting times ahead!

How to Make Money from a Creative Startup